When COVID-19 hit Australia, food agencies suddenly found themselves overwhelmed.  Fortunately, BeefBank, a charity set up and run by members of the Rotary Club of Brisbane Centenary, was well placed to help.BeefBank’s purpose is to provide meat protein to food agencies, primarily in South East Queensland.  It either sources donated cattle or purchases from the markets.  BeefBank then arranges for processing and delivery.  Past President Neville Blomeley explains that whilst most food agencies can acquire fruit and vegetables relatively easily, meat protein of all types can be extremely hard to obtain.   BeefBank is now a major meat protein supplier to FoodBank in Brisbane.

BeefBank’s logistic manager, Grahame Osterfield, estimates that the charity has provided meat for close on a million meals since it started.  BeefBank normally supplies around 100,000 meals a year but has been actively trying to boost supplies during the pandemic.

However, sourcing animals is a major issue, especially during the drought.  To meet demand, donations of cattle come from surprising sources.  For instance, BeefBank has an agreement in place with the prison farms in Queensland whilst it also get cows from supporters and even from deceased estates.   There was even a cow left at a gate for them!

And its not only beef.  Currently, BeefBank is managing over three tonnes of hams.   One council even asked BeefBank to take over a flock of sheep that it had acquired against unpaid rates and BeefBank regularly gets buffalo from a couple of dairies specializing in buffalo cheese.  It is a lot easier to give buffaloes to BeefBank than to sell-off themselves…and there is a tax benefit!

That is because, as a registered charity, BeefBank issues tax receipts so that donors get a tax deduction.  The only problem in recent times has been that, because of the drought, few farmers have a taxable income!  And that has caused problems for BeefBank because, not only have donations been a hard to come by, but when BeefBank goes to buy cattle, the cost of a cow has been out of this world.

BeefBank also raises funds needed to purchase cattle and pay for the processing and transport.  Some has come from the Rotary Club’s annual fun run which has attracted up to 1,000 runners in the past but BeefBank has benefited greatly from the Clem Jones Foundation.   Clem, a former Lord Mayor of Brisbane, was always a supporter of the people and his Foundation has followed this through with their sponsorship of food agencies.

If you are looking for a steak from BeefBank, forget it!  Meat is always in tremendous demand by the various street kitchens, community centres and local charities and mince, sausages and stewing steak are what they want.  Most of it ends up in stews, lasagne, and similar.   Beefbank has, however, also assisted with Christmas food hampers provided by a north coast council, has supplied chickens for Christmas lunches and, in the devasting Brisbane floods of ten years ago, many of the snags cooked for the Mud Army of volunteers also came from BeefBank. 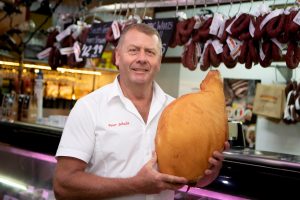 So who gets help?  Just about anyone who asks.  No one is discriminated against.  Brisbane Centenary’s president, Craig Carson, tells the story of visiting a street kitchen and seeing a well-dressed man drive up in a Mercedes to get a meal.   Craig looked at the leader who simply shrugged his shoulders.   Many months later, that same man turned up to thank the volunteers.  He had been at rock bottom and all he had were his clothes and the car in which he had been sleeping!  You can never tell who really needs help but the fact is that most of the people BeefBank assists desperately need it.

BeefBank’s chair, Andrew Rodgers, said that, despite Australia seeming to have recovered well from COVID, the need for BeefBank has never been greater.  BeefBank’s treasurer, Graeme Stratford, agrees: ‘All the economic data shows that the poor and disadvantaged continue to be badly hit by the pandemic and that it will take years for them to recover.’

So, the challenge for BeefBank is to maintain momentum and grow.  Their target is one million meals a year…and they think they can do it.