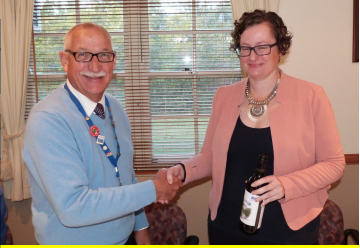 Kylie is a Barrister who specializes in criminal law…which means that she comes up against victims and perpetrators of domestic violence. She is passionate supporter of the rights of those who suffer domestic violence and is on the boards of several organizations including the National Advisory Board for the Soroptimists.

She has been taking a close look at amendments to the Family Law Act which would have made it harder to change binding financial agreements. Frequently, one side to the agreement is very disadvantaged because of a power imbalance. Those amendments will not now proceed.

She has also been looking at the Telecommunications Interception Act which allows governments to collect metadata from mobile phones, text messages and the internet. Metadata is not the actual content of each message or phone call (you still need a warrant for that) but provides details of location, number dialed, URL etc. The Act allows for an individual to view one’s own metadata up to two years retrospectively and therein lies a problem.

If someone is in any kind of a relationship then, usually, electronic communication devices such as mobile phones and internet are linked by the same billing account. If a person opts out of that relationship, very often, the other party will still able to see the metadata in real time and, if the relationship has been terminated because of domestic violence, this becomes a threat to the victim. The other party is able to track, spy and even stalk their ex-partner.

Perpetrators already frequently use GPS tracking, spyware and malware to track and monitor their ex-partners and engage in ‘spoofing’ (basically hacking). However, since mobile phones are constantly ‘talking’ to phone towers, there is a huge amount of information that becomes available.

Will Ockenden, a journalist with the ABC in Sydney, invited listeners to access his metadata and what could be found was frightening! One could find out where he lived, see that he had moved addresses, see where he worked, see who he had visited and even see the routes he took to work and back. It was even possible to see whether he was at home or not.

All this information would be extremely valuable to any perpetrator intent on harming an ex-partner who may have fled an abusive relationship. It puts the victim and family very much in harm’s way. Metadata allows a perpetrator to see what numbers have been dialed, who one has been texting and when you have been tweeting or using Facebook. And since this can be real time, clues may be given about someone preparing to flee an abusive relationship – which can be the most dangerous time for women.

Virtual Private Network (VPN) allows you to do things which cannot be tracked but, for instance, the US is looking to ban VPN.