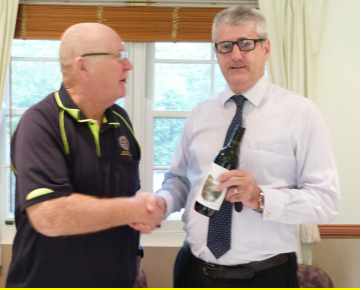 Doctor, amongst other meanings, means teacher and part of David’s presentation was about teaching us ways in which we can manage or even avoid stress. David noted that there were seven keys:

Stress affects the whole body. David claimed that one was five times more likely to suffer back pain and three time more likely to succumb to cancer. It was his view that expremier, Wayne Goss was as much a victim of stress as he was of his tumour! David also noted that the power that creates the body also mends the body but you have to let it do that.

Health is not simply the avoidance of disease and infirmity but the optimal well being of the person. However, the fact that one feels well at any stage is not necessarily a good indication of health since, in 80% of cases, the first indication that one has a heart problem is when they die from a heart attack! The nervous system is a key component in stress situations since it means that the brain is in constant contact with all other parts of the body. And the most important highway for these signals is the spine. If the spine is out of alignment, this can mean that messages are slow or lessened. And if you stoop….common in aging people…this can cause additional stress on the nervous system with up to an additional 5-7cms stretch on the spinal chord.

David also spoke about physical stress and, in particular, that in Queensland two thirds of adults and one quarter of children are either overweight or obese. David attributed this to the types of food we tend to eat which, in older times, were not available; for instance; processed carbohydrates. He spoke about lipo-laser treatment, a noninvasive and safe treatment for dissipating fat in the body noting that patients often lost between 2 and 12 centimetres around their waist per treatment.

Old age is not solely a matter of good genetics but of environmental aspects. Prescribed drugs (the most profitable industry of all) often have side effects which can be serious. The healthiest person, therefore, is one who does not have to take drugs.