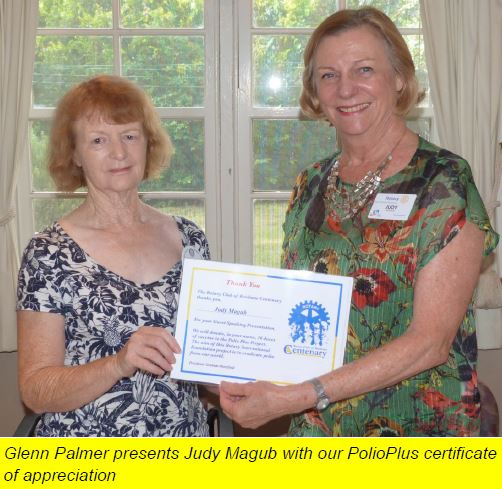 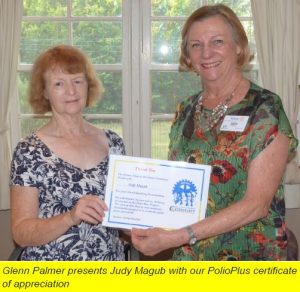 Judy is the foundation president of the Kenmore Historical Society which has produced a small book about the area.
The Kenmore area, including Chapel Hill, Fig Tree Pocket and Pullenvale, really stared in about 1850 when the area was surveyed and lots sold off. The industry of the area had been logging and trees were taken to Rafting Ground Road (now Rafting Ground Reserve) for transportation on the tide of the Brisbane River to Pattison’s Saw Mill.
Farming took over and numerous crops were produced including sugar, pineapple and even cotton during the American Civil War. Poultry farms also abounded.
Judy showed pictures from the archives of a number of important buildings including the original Methodist Chapel, – built in 1874 and still existing—the Presbyterian Chapel which also still exists although moved from its original location. The Water Trough and First World War memorial have been moved several times (now near Coles).
Up until 1929, the Orange Lodge Hall was used for meetings and other community purposes but was destroyed by fire….water not being available to save it! It was replaced by a new hall which became a centre for dances in the 1930’s at which up to 400 people would attend.
Judy also showed us pictures of the first service station (1938) and several of the original homes, one of which was Kenmore Park House—after which the area was named. (1880) as does Spinkbrae (1880) which was home to the Gibson family who had 50 acres down to the river.
There were a number of photos to illustrate fashions of the time. One was of a family in mourning in 1916. Mourning was traditionally expected to last six months and the women always wore black for the duration. However, the Government tried hard to shorten this time for obvious reasons…it would have been all too depressing!
There was a picture of people swimming in the river, wearing woollen togs—uncomfortable and heavy—utilitarian fashions in the 1930 following the Depression and some more fashionable clothes from the Ekka in 1950.
Pictures of early schools (1871) were also shown and Judy included a story about the local postman who rode his horse to the Fig Tree Pocket School to give the children the mail for their parents.
The last picture was the building of the Centenary Bridge and the Western Freeway in 1963 and this drew much interest from the members who tried to pick out landmarks.