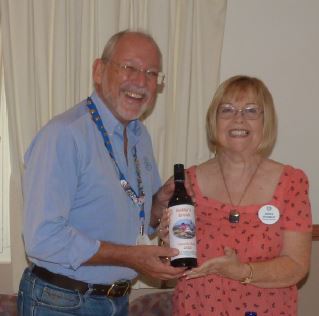 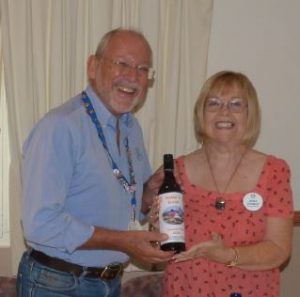 A common theme from Fijian Indians is that India can be a dirty place so Stephen decided that Sri Lanka might be better place …and so it proved. Adele told us that she was agreeably impressed by Colombo.
But there were a couple of trials and tribulations before they got there….such as a young female passenger suffering flight phobia and the plane having to return to the gate (at a cost to the airline of around $1,000 per minute!), an in-flight screen falling on Adele’s leg, badly bruising her shin (the injured Adele got 5,000 frequent flyer points for that as did the uninjured Stephen) and a minor discrepancy in Adele’s visa resulting in an interview with the Sri Lankan Chief Immigration Officer (easily sorted!).
Sri Lanka has a population of 21m with an average income of $10,000 pa. But this includes those in the city as tea pickers receive $7.50 per day plus housing and schooling.
Adele and Steve enjoyed Colombo but noted the massive Chinese investment in the harbour—designed to by-pass the expense of Singapore.
On their tour some of the highlights included:
Anurhadapwa—a UNESCO world heritage site containing a Buddhist Stupor—an earth filled mound covered with bricks and painted…a Buddhist symbol.
Sigiriya—an ancient kingdom
Kaudello Eco Park with its herd of 800 elephants and with washerwomen nonchalantly sharing the water with crocodiles. Some local villages still have elephants chained up for tourist rides but this is declining.
Dambulla with its five caves, all with figures carved out of the rock walls within each cave.
Kandy Cultural Centre with its colonial past and features and a lake full of fish but which no one catches because it is against Buddhist faith to do harm.
Some four and a half hours up to the mountain is Nuware Eliya or little England where they visited a tea plantation. No, it wasn’t Dilmar because Dilmar does not actually have any tea plantations…anywhere! It was here that Adele and Steve became expert tea sorters.
One thing they noticed was how much cooler it got. Another was that, whereas urban trains had hundreds of people hanging off the side of the carriages, only one person hung of the side on their train (probably because 4½ hours is a long time to hold on!).
They also visited Yala National Park where they saw leopards…something that very few Sri Lankans have done.. and also a huge amount of other wild life including water buffalo and mongooses who were quite unafraid of tourists.
They were delighted by Gallle with its mix of Portuguese, Dutch and British architecture. The old Portuguese harbour walls actually saved Galle from most of the effects of the tsunami.
Finally, they visited the Rotary Club of Colombo which was having a cluster meeting of nearby clubs including the Rotary Club of the Maldives, a 40 minute flight away. Whilst they were amongst the speakers, they felt somewhat upstaged by one member who had just climbed Mt Everest! – 60% physical and 40% mental effort!