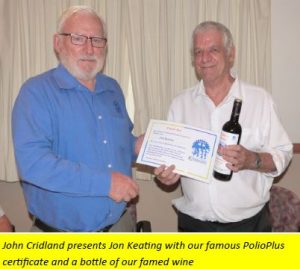 Tasmanian-born Jon contracted polio at the age of three. This left him crippled and it was not until he reached his tenth birthday that he learnt to walk. But he was a fighter and whilst he was a a home for crippled children, he found a guitar and taught himself to play. He idolized Elvis—but Elvis could not really play a guitar. But he noted a defining influence on him when Winnifred Atwell visited the home.
He joined a group or band (as one did in those days) but found his mobility compromised. However, he tells the story of finding a bike with no pedals, putting a bar on to rest his feet and a basket onto the front. He then got his dog to tow him up hills and then put the dog on the basket for downhill travel and his guitar strapped on his back!
By this time he was living back home but his disability left him isolated within the family (and an abusive father did not help!). Nevertheless, the band was starting to go places and at age 15, they had their first major gig at the local town hall. The drummer, not wanting the band to be held back by a cripple, moved to have Jon sacked but the band sacked the drummer instead. Jon grew to have major musical success and the band supported well known acts such as the Easybeats and the BGs.
In Tasmania, Jon was achieving big things; the band was getting bigger and bigger. However, the important thing, Jon says, was that it was no good simply being musically competent (which Jon certainly was) but that you also had to be a performer as well.
In 1965, Jon left Tasmania for Adelaide. He had been offered a printing apprenticeship and a job in Perth but never got there. He eventually moved to Brisbane where he found the country music scene. He joined one club in Crestmead and became its leader. Realizing that the club could be expended, he enlisted the support of Milton Dick to move to Inala.
But Jon had not played in a band since Tasmania and his music credentials were being questioned. So, about 9 years ago, he formed another band and has since regularly played in several groups.
He also finds time to tutor people and help them become more proficient.