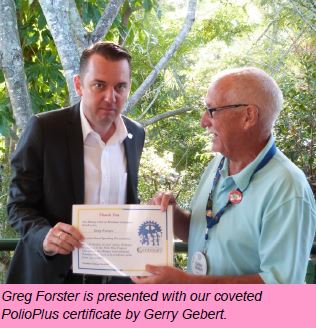 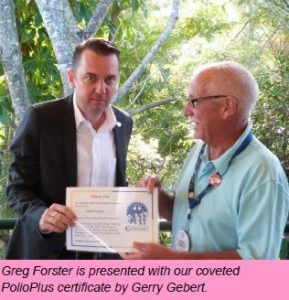 Greg is a member of Ipswich City, a club that has recently seen its membership climb from around 40 to over 60.
He told a story which had the moral that not everyone is motivated by the same things What our club was offering might not be attractive to, for instance, tradies and young parents because it was a breakfast club. We should, however, have a target ‘audience’.
But he did make the point that we should look at other clubs and compare ourselves. We might be surprised that some things are being done better in our club. An important feature of all clubs was that they should all be fun. If you look at any group, whether it is within Rotary, the Chamber of Commerce or even the church, the organizations that are growing are those which have fun.
He also made the point that if nothing changes, then nothing changes and that club will become extinct ….because they are doing the same old things. Look for things that are different, look for brilliant guest speakers and bear in mind that guest speakers are potential members…as, indeed, are volunteers who assist in club events.
So do not be afraid to ask for helpers ….Greg called it the Campbell Newman approach!
Greg added that many people do not actually know what Rotary is about and he made the point that, at the beginning, Rotary provided networking opportunities in an age where business was very much ‘dog eat dog’ and no one helped anyone else. Today, we all come with circles of contacts which we should use. We all joined for a reason…don’t be afraid to tell your friends that reason!