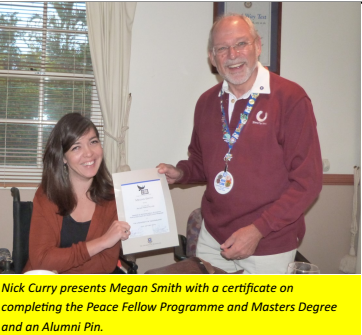 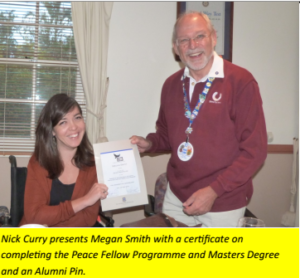 Megan briefly described the Peace Fellow programme with some 50-60 students each year across six universities around the world taking a Masters degree in Peace and Conflict Resolution Studies. Megan submitted her last assignment last week and has, thus, completed her degree. She mentioned that, as part of the degree, she had to undertake an Applied Field Experience which she described as a ‘practical’.

Her AFE was in Cambodia where she worked with UNICEF. The director in Cambodia, co-incidentally, was in the first cohort of the Peace Fellow programme at U of Q! Part of her role with the Disability Inclusion Team there was to travel across the country; looking at how children with disabilities were supported by both families and the community.

She also worked with Disability Australia and the Aborigine Centre for People with Disabilities in Sydney, the funding of which came from a grant from the Foundation which our club had obtained. She did policy work in connection with the National Disability Insurance Scheme and had gained her valuable experience in specific issues of disability within urban poverty and remote area access.

Megan apologised if she looked or sounded a bit out of it but she had had virtually no sleep that night. Megan attended a second job interview by skype at 1:00am and subsequently been contacted a couple of hours later and informed that she had been selected for that job. This was with the UN in New York working on policy. The job involves operating between the UN, the UNHCR in Geneva and a UK based disability organization. She said that she could never have dreamed of entering this brave new world and it would not have open to her without the opportunities afforded to her by virtue of the Peace Fellow programme.

She leaves the next day for California where her mother lives and thence to New York to start the following week. Megan almost forgot to tell us that UNICEF in Cambodia had nominated her to attend the recent world disability conference in Turkey where she moderated some of the out of session discussions. The conference aim is to make aid more effective and this was the first time disabilities had been addressed as part of this forum. It was something of a flying visit at the end of May at a time when she was also trying to get her final assignments finished and submitted!