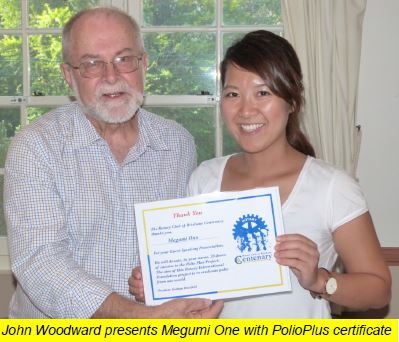 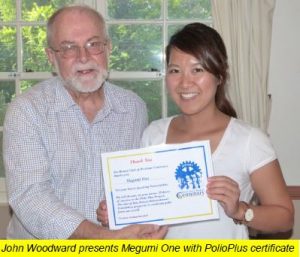 Megumi Ono or Megoo comes from Hyogo which is relatively near Kyoto. She is hosted by the Rotary Club of Sunnybank Hills. Her counsellor is PDG Anne Brand. By comparison, Hyogo has more twice the population of Brisbane at 5.5m cf 2.3m in Brisbane but has half the area.
She is currently studying a masters degree in Business Studies at Griffith University.
Her original degree in Japan is in architecture (undertaken solely, it appears, because she wants to design her own home!). Megumi noted that the actual degree tends to be irrelevant when you join a large company as you rarely get any choice of job…the company decides where it wants to place you and, in Megumi’s instance, she ended up in internal audit. This necessitated a quick Google search on what, exactly, internal audit was! Without mathematics or accounting, the next year or so proved somewhat challenging!
The company Megumi works for is Rakuten. This company operates world-wide with about 10,000 employees, one third of which are non-Japanese representing 69 different countries.
Each week, the office where she worked holds a meeting of all staff. At one particular meeting, someone had organised for a team of cheerleaders to come in and entertain the troops. However, at least one employee obviously thought that very short skirts and crop tops were inappropriate for the company meeting, especially given the reaction of some of the men. As Megumi was to find out, internal audit also involved trying to improve the work environment so Megumi ended up getting involved in the mediation and conciliation of this complaint. What this led to was for Megumi to question the status of women in developing countries, particularly in jobs and schooling. But there are implications for Japan with its aging society in its sexist and ethnicity attitudes. In this, Megumi noted that Australia appeared much more progressive.
But Megumi noted several other differences. She loved a vending machine that dispensed thongs…so Australian! But bottled water was expensive. She noted the differences in cigarette packaging and cost…Australia the way to go here! In general Japan was far more regimented and Australia more mechanized. And she missed the 24hr convenience stores! Toilets (very different and automated) and students having to clean their schools instead of employing cleaners were other differences
Immigration was something else. Australia had 168.183 immigrants last year, Japan‘s figures are not available (possibly because there were no immigrants!) but 2,307,388 foreigners live in Japan.